WWLD? – What would Luke do? He was a physician a mender healer.

Colossians 4:14 14 Luke, the beloved physician, and Demas, greet you.

As a physician he did what people of his time did used herbs.

The definition of a Physician is a mender or a healer. So he healed people using Biblical principles. There’s a difference between whats used in the bible and whats used in the medical field. What Luke would do is take the things God put naturally in the Earth and use them to help heal the sick. Like a nutritionist.

Now, the doctors of his time are a lot like the doctors of our time they used formulas that were comprised of processed and chemical compounds similar to what they are using now. Trying to improve on what God put in the Earth for us to heal. Conjuring up formulas not lead by the Holy Spirit but by demon spirits. The same as today’s practice of medicine using synthetics conjured up and concocted not lead by the Holy Spirit. Being lead by the Holy Spirit there is evidence he abides in you. They don’t have that so the spirits leading them well. I’ll let you make your own assumption on where they are coming from. Especially with the word Pharmaceutical meaning sorcery being a dead give away. How many of you are able to say what’s going on in this Walgreen’s logo? (bibbidy boobdy boo folks- it’s witchcraft a cauldron with magical powers powering out of it) 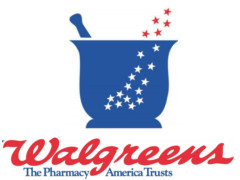 Luke was a physician like the Rabbinical Priests that used nutrition to heal the sick. I saw this because in his time either they used nutrition or they used sorcery. They made soups, poultices, anointing oils that penetrate the skin and clean the blood. All things in their natural state coming straight from the ground.

When someone was weak (translated from Greek meaning sick) The Physicians used nutrition to heal. Over and over you read about the foods being used. Even with taking communion which, was a little wine antioxidants and purifying properties. And the bread high in B vitamins.

So, Luke would do what the Lord lead him to do. As a Physician under the guidance of the great physician, he would pray and use nutrition. Luke did not use Pharmacy. He couldn’t if it did he wouldn’t be a true follower of Christ. The Holy Bible says sorcery is an abomination.