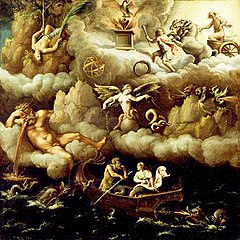 Imagine the faith it took for Peter to take those few steps. But when he saw the wind boisterous, he was afraid; and beginning to sink, he cried, saying, Lord, save me. It took a lot of faith to do what he did with the Lord in front of him he still failed. The Lord rebuked him for falling in the water. He said O thou of little faith, wherefore didst thou doubt?

If we could walk on water we’d have courage to fight many battles and overcome.  I bet Peter felt so enthused by his little conquest. He still goes down as the only one in history to  walk on water like Yeshua(Jesus) did. I wish I had that faith. What it takes is hearing the Lords voice to do the impossible with him. Listen and obey the Lord and he’ll use these feats to build your confidence to do much more.

If I could walk on water I’d do the most amazing things. The Lord has walked me through things you wouldn’t believe. The mini tornadoes in Colorado Springs he had me drive through one to not get stuck in the flash floods. I prayed in tongues the whole time driving through. It started with pellets than they got to the size of golf balls and sheets of ice covered my windshield. I heard the Lord clearly keep driving no harm will come to you. I did it crying the whole time too lol. At the time I didn’t know it was mini tornadoes until I got back and listened to the news. My car never left the ground I made it through. I didn’t walk on water but if I did God could ask me to do anything and I could!

Our faith must increase for these days ahead. We’ll have to trust him to do for us the impossible to keep us protected and safe. In the movies “Cry China” the woman was in front of a firing squad and all of the bullets were taken away by a strong wind not one hit her. Do you want that faith too?

What could God use you to do if you could walk on water? He’s bidding us all to come rise up in our faith!

Seven years ago today I got the call from my youngest brother. It was right after saying to my boyfriend at the time I can’t believe Michael Jackson died. My ringer has never been on but I glanced over saw the call coming in and picked up. My brother said”Dads gone”. I said “you’re not funny that’s not something to joke with me about!” My brother is the kind that would joke around abut things but this time he wasn’t laughing. I fell down against the door dropped my phone. My cruel boyfriend looked over at me and said I’m not going to hold you. I couldn’t talk for hours from the shock I went numb. The reality was too hard for me to face. I’ll never be able to see my Dad again.

I had to go to work that day I was already filling in for a girl so there was no one to cover me. And was getting paid good money to represent Fios on the 4th of July holiday. With no way of flying out that night I worked and tried not to cry all day as a brand ambassador representing a company like Verizon it’s just not good to do. No body knew my pain they all saw the painted smile. I stuffed things down to carry on. I did this so well my grieving process took longer. That night my boyfriend took me out drinking I got blasted. We hung out by the pier and watched the fireworks. I looked up and said” Daddys watching all of this from heaven how cool is that.”

In months after I spoke with many people that lost a parent. Almost everywhere I went there was someone telling me they lost a Mom or Dad.  The week before my Dad passed Farrah Fawcett, Ed McMahn, Michael Jackson and the infomercial guy decided to throw himself in to make it four people you heard of dying in a row. Lots of people passing  in abnormal numbers.

This was in 2009. I think no coincidence after the anti christ took office. Yes I identified him!  Being a Muslim, supporting homosexuality, abortion and not supporting Israel those are all things considered anti christ. Isn’t it interesting how someone could be Muslim and support homosexuality? Well everything he supports is so for me it was easy to identify.

The 4th of July for me is not only a time of reflecting on my Dad. But on what’s happened to America. We all died too when we went under the power of anti christ. In deepest sorrow for my personal loss and our Countries too.